This project was innovative in that it was started from fresh with no foundations to build on. By working as a team, we have created guidelines, documentation and created multiagency pathways direct from the Emergency Departments.

The Leadership style initially started as democratic in nature. With social equality as a focus, as the momentum around the project grew it turned to a more transformational collective leadership.

The success of this project has been measured on the number of referrals made to the local authority and other homeless services. The support we have had from our teams has been phenomenal. This project will be sustainable as our teams have seen a real time reduction in the number of no fixed abode attendances, leading to reduced pressures on the ED. The success of the project has lead to further support and interest from other departments, and it is now included in the role of the new Homeless Specialist Nurse to adapt, transfer and disseminate the project across the acute trust.

There are 320,000 homeless people in Britain. This number is on the rise and has risen by 169% since 2010. Gloucestershire Hospitals Foundation Trust (GHFT) sees between approximately 400 – 700 No Fixed Abode attendances to its two Emergency Departments (ED) annually and this number is rising. These figures are do not take into account hidden homelessness – those that are staying with family or friends, squatters, those in overcrowded accommodation and victims of abuse. These are deemed to be in the “at risk of homelessness” group. It was vital we implemented measures from ED that could potentially break the cycle of homelessness by initiating support early at the ‘hidden homeless’ stage before it moves onto street sleeping.

In 2017 the Homeless Reduction Act was introduced. This places a legal “duty to refer” on the trust to refer all those that are homeless or at risk of homelessness to a Local Authority. Long-term homelessness is characterised by tri-morbidity (combination of mental ill health, physical ill health and drug or alcohol misuse).

This results in emergency care costs that are eight times higher than for patients who are not homeless. Clinicians in the ED may well be the first and only healthcare professionals that a homeless person may see. It is therefore important that it be recognised that this encounter could be a key opportunity to improve the lives of this group of vulnerable people.

In 2013, Dr Pippa Medcalf initiated a Time To Heal project in the Trust which saw the employment of a Housing Officer for homeless inpatients at GRH. This project was very successful with the housing officer securing accommodation on discharge in 84% of referrals to him.

The main limitations of this project what that it only covered inpatients at one hospital site and as ED’s are classified as outpatient departments, she often found resistance and barriers to improving care in the EDs.

At the time the cultural norm across Emergency care in the Trust was to discharge homeless patients back to the street’s day or night with no ongoing support offered. The Trust also had no overall policy or documentation in place to support staff in caring for homeless patients.

Although I have worked in unscheduled care for the last 8 years, I was suddenly more aware of homeless patients being discharged back to the streets with no support. I started volunteering with local homeless charities and spent time with the Homeless Healthcare Team (community-based GP services).

Main aims at this time were:

The overwhelming response was that all services felt they needed communication from the ED and that there was a lack of joined up care when it came to homeless patients.

I worked with the Local Authorities and local services to create referral pathways and the ED homeless patient guidelines were initiated. This gave staff options to refer patients 24 hours a day to the Street Outreach Teams. I used this as an opportunity to improve the overall care we give to our homeless patients by implementing immediate ongoing support from the ED.

I gave a presentation to the Medical Division Showcase in the Trust. Here the initiative gained more management support and we could initiate the project across both EDs in the Trust.

We set up a working action group which had one team member from each staff group (doctor, nurse, modern matron, emergency nurse practitioner and senior sisters). These groups were key in delivering the initiative.

Becca and I undertook Quality Improvement training from our Trust Academy and set about creating our documents and collecting data. Dr Helen Mansfield (ED consultant) supported us throughout the Quality Improvement process and helped with data collection. She worked with IT to provide us with a report that allows us to see No Fixed Abode presentations in real time.

We created the ED homeless patient checklist. This was trialled in the departments and altered as per feedback from staff before going through the documentation committee. This document covered our duty to refer but also enables staff to refer homeless patients for ongoing support immediately on discharge from ED. 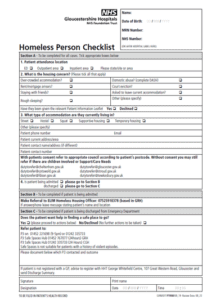 We updated our Homeless patient information leaflets with help and support from the Trust Information Governance team.

We worked with local charities to ensure our homeless clothes cupboard is well stocked with sensible supplies for homeless patients.

I continued to volunteer with local charities and keep up the Multi agency working to ensure the new referral pathways continued to work for all involved and any issues were resolved quickly.

We provided teaching for all staff groups in ED, both regular and Ad hoc teaching sessions were provided. Working with reception staff was important are key to identifying NFA patients. We also used noticeboards in staff rooms for poster presentations and communicated with our teams via email for updates and to share positive results.

As I worked on one site (GRH) and Becca in the other (CGH) we were able to educate and problem solve as we worked, with our teams feeling comfortable enough to contact us with any issues.

We used data from the IT report and our completed checklists to monitor response.

Our target group was homeless patients that were medically fit for discharge from the ED.

Those that did not wait for assessment were discounted from the figure as all referrals can only be made with the consent of the patient.

We took the figure from the IT report and compared it with number of checklists completed to give us a compliance rate. As this was a new process, a new document to complete and staff were used to discharging patients back to the street. We were also heading into the busiest time of year in ED, so we set an initial compliance aim of 30% over 6 months.

Our results showed that at time of audit, we had hit a compliance rate of 84%.

3 months data isn’t enough to show a definitive trend yet, but certainly as our compliance rate is increasing so the re-attendance rate for homeless patients is reducing, therefore reducing the pressure on ED. And more importantly homeless patients are receiving early vital support.

There are still some IT limitations; our report only picks up No Fixed Abode attendances and not those who book in with old addresses or a friend or relatives address. We have emphasised in our teaching how important social assessments are in picking up on the hidden homeless group and the at-risk group. While auditing we have had a lot of checklists completed for patients who weren’t on our report. So, we are hopeful that staff are doing some very good social assessments and initiating support, therefore leading to improved continuity of care and reduced admittance to the acute trust.

We would normally expect our NFA attendances to increase over the winter months, however so far we are seeing a downward trend.

Homeless patients often present with complex social, mental, physical and emotional needs. As a trust we had no policy, or guidance to support staff in making good holistic assessments of homeless patients. Armed with work undertaken for this project we met with commissioners in May 2019. We secured funding for an additional housing officer to work at Cheltenham General Hospital and a Trust Homeless Specialist nurse. This role will be utilised to initiate guidance and support for staff in caring for homeless patients and to keep the momentum going with this initiative in the Emergency Departments. This role will bridge the communication gap between the acute trusts and community services – leading to better joined up care and better outcomes for homeless patients.

This initiative is relevant to any group that cares for homeless people.

ED traditionally doesn’t communicate out to community teams but work for this project has led to close working relationships being formed with local services that provide ongoing support for homeless people. Street outreach teams now feel comfortable enough to come into the ED and assess patients. This new working relationship has led to some homeless patients being accommodated direct from the ED instead of back to the street.

Parts of this initiative have been presented nationally as part of Dr Medcalf’s inpatient initiative. This has led to other hospital trusts emailing us and asking for guidance in implementing similar measures in their own Emergency Departments.

This initiative has been started from scratch. From volunteering, learning and communicating GHFT now not only meets legislative requirements but ensures ongoing support is implemented 24 hours a day for this vulnerable group of people. Work for this initiative has led to homeless patients now being safeguarded by the trust.

Becca and I working in the ED teams has played a big part in seeing a cultural shift and implementing a change. Adding in a document to workload isn’t easy, but I think our knowledge and understanding of the service has led to this initiative being successful. All our referral pathways were made with ED service demands in mind and what could realistically be achieved. The community services were very understanding about this and we worked together to create pathways to suit all our services. This led to a higher than expected compliance rate and improved care.

Be realistic and find out from staff that will be carrying out the work what is important to them.